Zero knowledge proofs (ZKP) is one of the the most exciting cryptographic inventions since Public-key cryptography. zk-SNARK is a specific type of ZKP which allows one party (the prover) to convince other parties (the verifiers) that the prover faithfully executed a program with some secret information, without conveying any knowledge about the secret information itself. zk-SNARK also generates succinct (hundreds of bytes) proofs that can be verified within the range of miliseconds even though the original computation might be much larger, which means that other than the obvious privacy benefits, zk-SNARK can also be used to trustlessly outsource expensive computation.

To apply zk-SNARK, a computation needs to be expressed in terms of algebraic circuit, converted to a constraint system called R1CS, and then finally a form called “quadratic arithmetic program” (QAP). The intuition of going through this complex transformation is that: 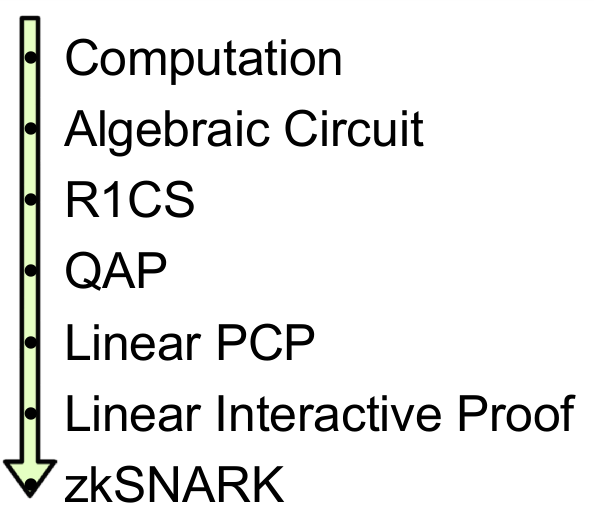 Steps of transformation for zk-SNARK, drawn by Eran Tromer

For more detailed explanations of the QAP transformation, please take a look at Why and How zk-SNARK works by Maksym Petkus or Quadratic Arithmetic Programs: from Zero to Hero by Vitalik Buterin. To use an example in Vitalik’s article, a simple program x³ + x + 5 == 35 can be converted into the following QAP. 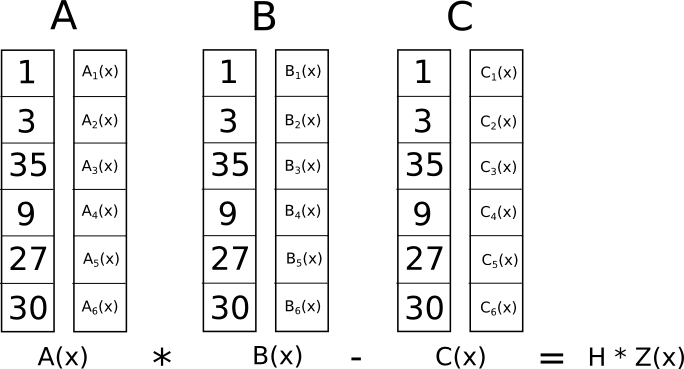 This article assumes that the readers understand the process of QAP transformation, specifically why proving A(τ)*B(τ)-C(τ) = H(τ)*Z(τ) is important in terms of completenss and soundness. It also assumes some high level understanding of the elliptic curve paring. The purpose of the article is to explain how zk-SNARK works by walking through how it is implemented in Bellman (0.7.0), a rust library used by the first widespread zk-SNARK application ZCash. Bellman currently implements the Groth16 proving system, which can be roughly divided into three parts: Trusted setup, Prover and Verifier. This article discusses each part in details.

Trusted setup is a process to create what’s called “Common Reference String” (CRS) between provers and verifiers. CRS are basically encrypted secrets that are required by both provers and verifiers to run the cryptographic protocols (e.g. Groth16) in zk-SNARK. Verifiers need to trust that the original secrets (a.k.a toxic waste) are destroyed after the setup process, otherwise the entire proof system breaks down.

First, let’s define some parameters for a computation. We can use m to denote its number of variables, l of which are public. Take x³ + x + 5 = 35 as an example where the solution 3 is the secret. This program can be broken up into the following 3 constraints in the form of A * B = C:

There are 4 variables in total (i.e. x, x_squared, x_cubed and out), among which out has a publicly known value of 35. Therefore m and l should be 4 and 1 respectively.

Another important parameter for the computation is the number of constraints n, which determines the target polynomial Z(x). In the above example, the value of n should be 3.

Assuming that the program is converted to the QAP form, which means that we know the variable polynomials Aᵢ(x), Bᵢ(x) and Cᵢ(x). If the prover knows the value of all variables wᵢ (both the public ones and secret ones), then ultimately (s)he wants to prove the following statement in such a way that reveals nothing about the secret portion of wᵢ:

Groth16 protocol is way to achieve that. It requires two paring friendly curves: G1, G2 (with the paring domain GT). During the trusted setup, the first thing it does is to select one random point on each curve: g1 and g2.

Next, it generates the following 5 random field elements: α (alpha), β (beta), γ (gamma), δ (delta) and τ (tau). τ is the secret value at which all the polynomials are evaluated later on. With α and β, it also defines a polynomial Lᵢ(x):

With the information created so far, Groth16 generates the following G1 and G2 points (values encrypted using g1 or g2) for the prover:

For the verifier, the following points on G1 and G2 are created, along with a pre-computed value g₁ᵅ * g₂ᵝ using elliptic curve paring. Including g₁ᵅ * g₂ᵝ in CRS improves the verification performance since it is needed every time a proof is verified.

After all these information is created, it is mandatory that random field elements α, β, γ, δ and τ (a.k.a toxic waste) are destroyed. In the Prover and Verifier section, we will discuss how these information is used by both the prover and verifier in such a way that the prover can convince the verifier that A(x) * B(x) - C(x) = H(x) * Z(x) is valid without revealing any secrets. For now let’s take a look at how trusted setup is implemented in Bellman.

The code that implements trusted setup in Bellman is located in generator.rs, specifically the generate_random_parameters function. The code that generates g1, g2, α, β, γ, δ and τ is pretty straightforward.

In Bellman, a computation is expressed in “circuits” using the Circuit and ConstraintSystem abstraction. For x³ + x + 5 = 35, which has the following constraints:

We can express the 2nd constraint x_squared * x = x_cubed in bellman like this:

Recall that we also need τⁱ (i in 0..n-1) as both G1 and G2 points in the trusted setup. This is called powers of tau, which is important for evaluating polynomials blindly at value τ. Further more, we need τⁱZ(τ)/δ as well where Z(x) is the target polynomial.

This is how powers of tau is calculated in bellman:

and coeff is later on multiplied with powers of tau to get τⁱZ(τ)/δ.

Here is how Lᵢ(τ)/δ is calculated at τ in Bellman, specifically:

As we can see, in order to evaluate Lᵢ(τ), we need to evaluate Aᵢ(τ), Bᵢ(τ) and Cᵢ(τ) as well. If we think about it, Lᵢ(τ), Aᵢ(τ), Bᵢ(τ) and Cᵢ(τ) are the lagrange representation of L(x), A(x), B(x) and C(x). Prover only needs the secret variable portion of the Lᵢ(τ), verifier only needs the public variable portion of the Lᵢ(τ). Here is the VerifyingKey which is created at the end of the trusted setup for the verifier:

Finally at this point, we have created all the parameters we need, here are all the Parameters that the trusted setup process returns:

r and s are randomly generated field elements by the prover.

With Aₚ, Bₚ and Cₚ, the verifier can somehow verify that the statement A(τ)*B(τ) - C(τ) = H(τ)*Z(τ) is valid and therefore confirm that the prover had executed the computation faithfully without revealing the auxiliary variables. We will break down how this is achieved later when we discuss verifiers. For now, let’s focus on how the prover constructs Aₚ, Bₚ and Cₚ.

From the trusted setup, the prover knows the G1 elements α, δ and G2 elements β, δ. The prover also knows the “computation”, which is expressed as R1CS circuit and then converted to Quadratic Arithmetic Program (QAP).

Concretely, the QAP program is expressed using A, B and C where

Also remember that L and H are defined in terms of A, B, C and T, as follows

The prover code in bellman is in located in prover.rs, specifically the create_proof function.

First of all, the circuit is synthesized using the ProvingAssignment data structure, which is also a type of ConstraintSystem.

When alloc_input or alloc is called, the actual value of the variable is pushed to input_assignment and aux_assignment vector respectively. Variables are tracked by their position (index) in those vectors.

When enforce is called, it evaluates A, B and C for each operation (in the form of A*B=C) using the variable values in input_assignment and aux_assignment. The evaluation results are pushed to a, b and c vectors respectively. After the entire circuit is synthesized, a, b and c essentially becomes the lagrange representation of A(x), B(x) and C(x).

Bₚ is computed in a very similiar way. What is more interesting is Cₚ since it involves a more complex H(τ)*(Z(τ)/δ) expression. Recall that H(τ) is basically (A(t) * B(t) - C(t)) / Z(t) and Z(x) is the target polynomial that is publicly known. Here is how H(τ)*(Z(τ)/δ) gets computed (represented by h in the code):

Now the prover knows H(τ)*(Z(τ)/δ), it becomes a bit easier to computed Cₚ:

The goal of the verifier is to take the proof from the prover, i.e. Aₚ, Bₚ and Cₚ, and verify that the following equation holds:

To see what exactly does it mean if this equation holds, we can try to expand on both the left hand side (LHS) and the right hand side (RHS) of the equation.

If we can prove LHS = RHS, then after removing REM on both sides, we also proved that A(τ)*B(τ)-C(τ) = H(τ)*Z(τ), which is the end goal of the verifier! Once this is valid, the verifier is confident that the program is executed faithfully with correct values of the auxiliary variables.

The E::final_exponentiation and E::miller_loop functions are two steps needed to compute the elliptic curve paring. The paring of α*β (pvk.alpha_g1_beta_g2) is already pre-computed in the setup phase.

In this article, we walked through how zk-SNARK with Groth16 protocol is implemented in Bellman, which actually powers a nearly 1 billion dollar cryptocurrency (at the time of writing). Instead of just relying on government regulations and the mercy of big internet companies, I hope zk-SNARK and ZKP in general can be part of the solution for our privacy issues in the future.