One of the fundamental aspects of the lighting network protocol is how payment channels are established and utilized to transfer funds. Just like TCP connection, payment channel is virtual in the sense that it is achieved by carefully designed smart contracts which gives user the illusion that there exists a channel. In this post, the smart contracts expressed in Bitcoin script in different types of transactions within the lightning payment channel are discussed in details, with graphs illustrating their potential behaviors under different scenarios.

Assuming that Alice and Bob want to establish a lightning channel between themselves, a transaction with a 2-of-2 multisig output that requires both of their signatures to unlock needs to be committed to the blockchain. This is called a funding transaction. 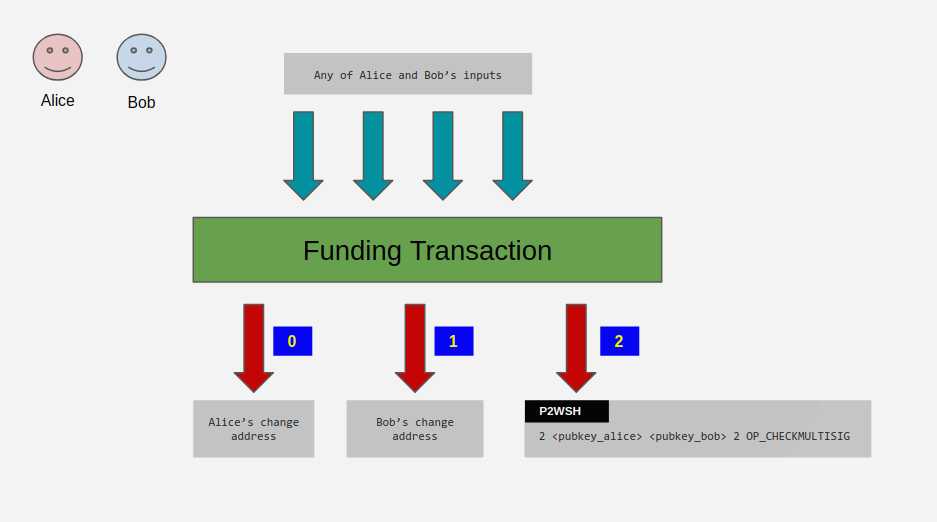 As illustrated above, inputs of the funding transaction are usually (but not neccessarily) contributed by Alice and/or Bob. Output 0 and 1 represents the potential changes going back to the addresses that Alice or Bob controls. What’s important is output 2 which contains a P2WSH multisig script that locks up the total fund for the lifetime of this payment channel between Alice and Bob.

After funding transaction is confirmed onchain, Alice and Bob can start updating the balance between themselves offchain using commitment transactions. Each commitment transaction can be thought of as a legal contract between Alice and Bob dictating how the balance should look like in different scenarios. Since the contracts are expressed in Bitcoin script, they could be enforced at any time if either party choose to unilaterally broadcast it to the Bitcoin network. With that in mind, Alice and Bob can confidently conduct unlimited number of commitment transactions knowing that no one can be cheated during the process. This essentially turns payment channel into a cache where most the intermidiate balance updates get resolved offchain, with onchain transaction only needed in case of disputes or final settlement, making Bitcoin network much more scalable.

Major design goals of the commitment transaction are: 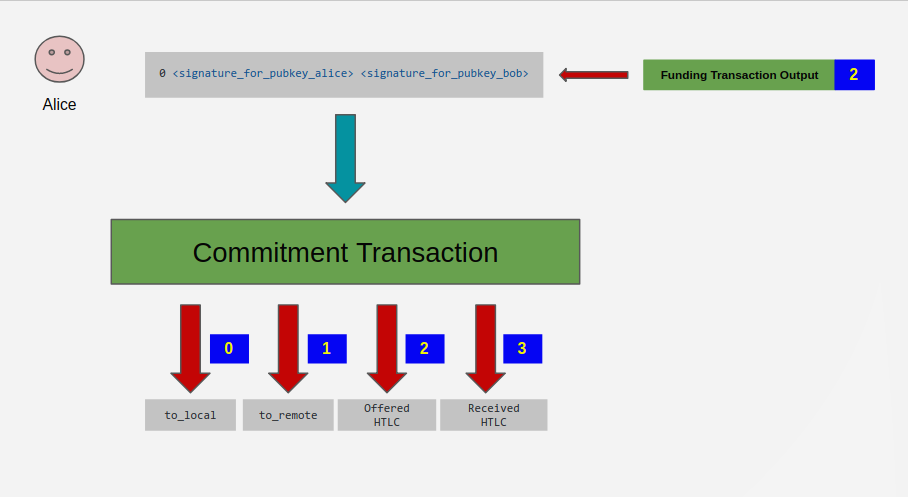 Commitment transactions always unlock the 2-of-2 multisig output of the funding transaction which, as illustrated above, requires both Alice and Bob’s signatures. It is important to realize that each commitment transaction has an asymmetric version and the pair are held seperately by each participant. This pair of commitment transactions are functionally similiar but with built-in mechanisms to penalize its holder if they try to cheat. Both version can be submitted independently if needed, only one of them will succeed since they spend the same output.

In the following sections, each type of outputs is discussed in greater details. 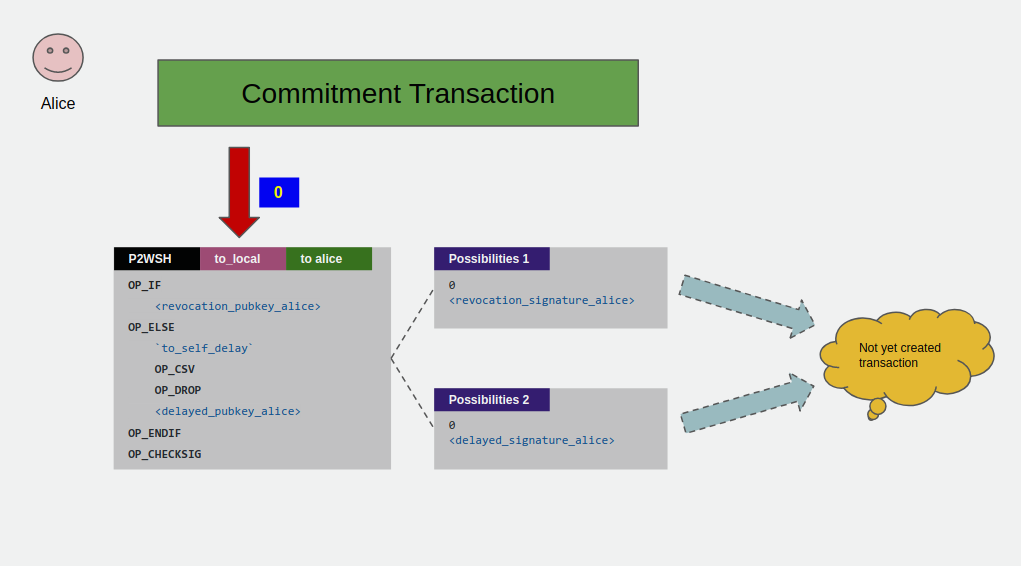 to_local output represents the current balance of the holder in the channel, in our case Alice, through a Revocable Sequence Maturity Contracts (RSMC). The purpose of RSMC is to ensure that all previous balances can be revoked when the agreement for a new balance is reached between Alice and Bob.

In Alice’s commitment transaction, RSMC in the to_local output can be encoded in the following scriptSig:

If the commitment transaction is the latest mutually agreed one, Alice will be able to spend this output after some delay with delayed_signature_alice. The delay is delibrately put in place to give Bob some time to exercise the breach remedy clause if Alice happens to break the agreement by spending this output after it becomes outdated. In fact, all outputs that return funds to the holder of the commitment transaction must be delayed for to_self_delay blocks for the same reason.

Bitcoin doesn’t natively support the concept of transaction revocation, RSMC essentially offers such a functionality by making an older output undesirable to spend by both parties.

However, this requires Bob to be online often and constantly monitor the network, something that is not always possible, that is where WatchTower comes into the picture. 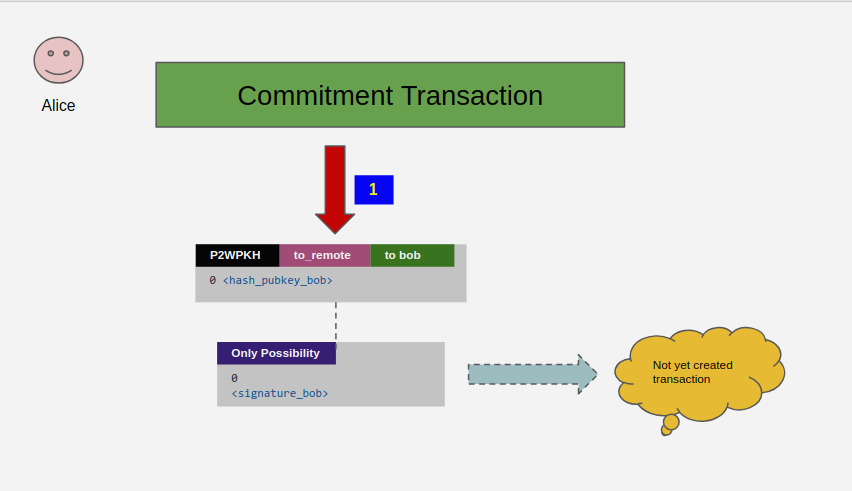 to_remote represents the current balance of holder’s counterparty in the channel, in our case Bob. Since Bob is unable to broadcast Alice’s version of commitment transaction, no breach remedy clause is needed here. The output can be spent immediately by Bob if signature_bob is provided. 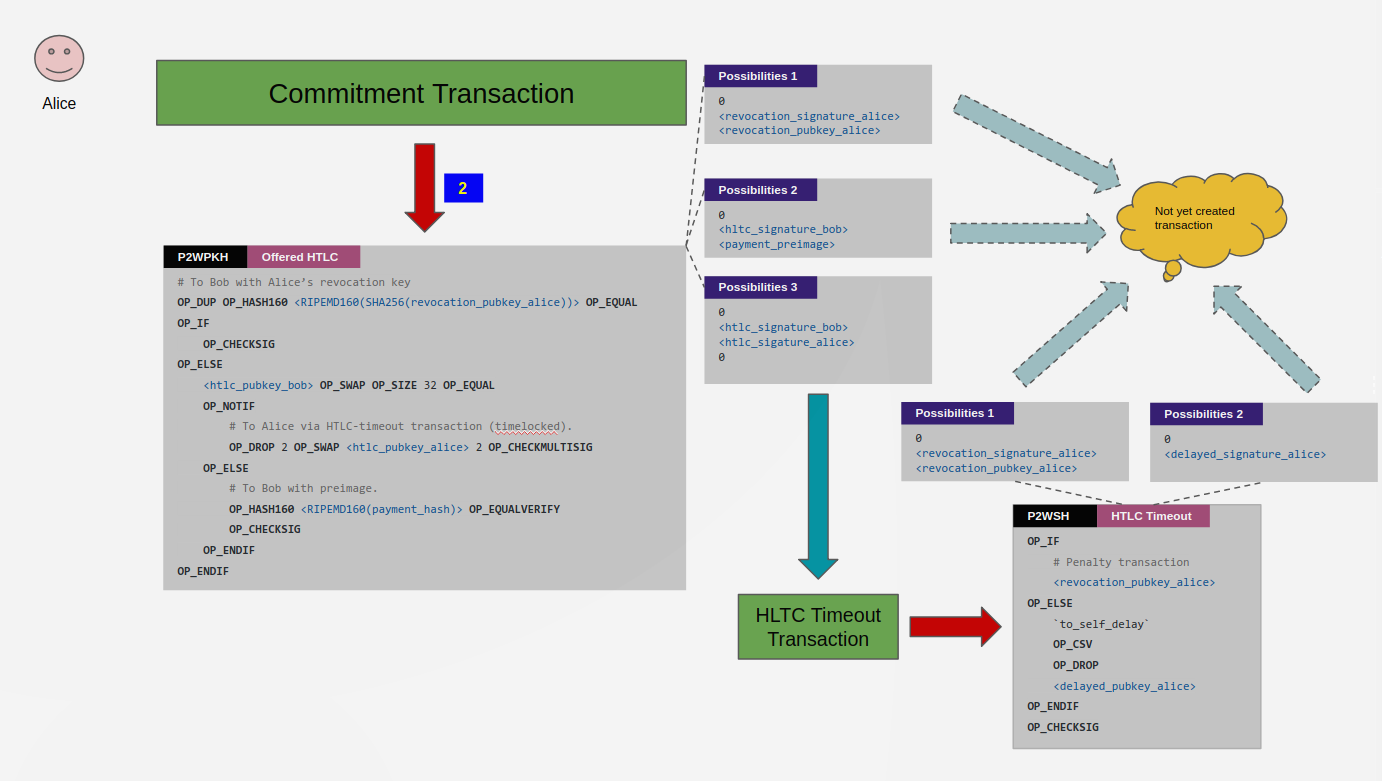 Offered HTLC represents the payment flowing from the holder of the commitment transaction to his/her counterparty, in our case, from Alice to Bob. HTLC stands for Hash Time Locked Contracts, which essentially says “I will pay you this amount if you show me the answer to this quiz within a certain period of time, otherwise the fund returns back to me”. Like the to_local output, Offered HTLC also contains a breach remedy clause in case Alice violates the agreement by publishing an outdated version of the commitment transaction.

In Alice’s commitment transaction, Offered HTLC can be expressed in the following scriptSig:

Bob can spend the output immediately by providing hltc_signature_bob and payment_preimage within a certain period of time. payment_preimage is the answer to the quiz (preimage of a hash) that Alice requires Bob to come up with to be able to claim the fund. No breach remedy clause is needed here.

Alice can spend the output after a delay by providing htlc_signature_bob and htlc_sigature_alice via a seperate HTLC timeout transaction, which in turn locks up the fund in a RSMC contract. htlc_signature_bob is shared by Bob to Alice during the construction of this commitment transaction. As we can recall, RSMC contract contains a to_self_delay value which specifies the time limit within which the counterparty can exercise the breach remedy clause. The nLockTime for the HTLC timeout transaction is set to cltv_expiry, which represents the delay after which the HTLC times out. The reason for needing a seperate HTLC timeout transaction is that it allows HTLC to timeout before breach remedy can be exercised. Otherwise, the required minimum timeout on HTLCs is lengthened by the delay for breach remedy, causing longer timeouts for HTLCs traversing the network.

The locking script for Alice’s HTLC timeout transaction can be encoded in the following scriptSig:

It can either be spent by Alice using delayed_signature_alice after the delay for breach remedy, or by Bob using revocation_signature_alice if Alice publishes the outdated version of the transaction. 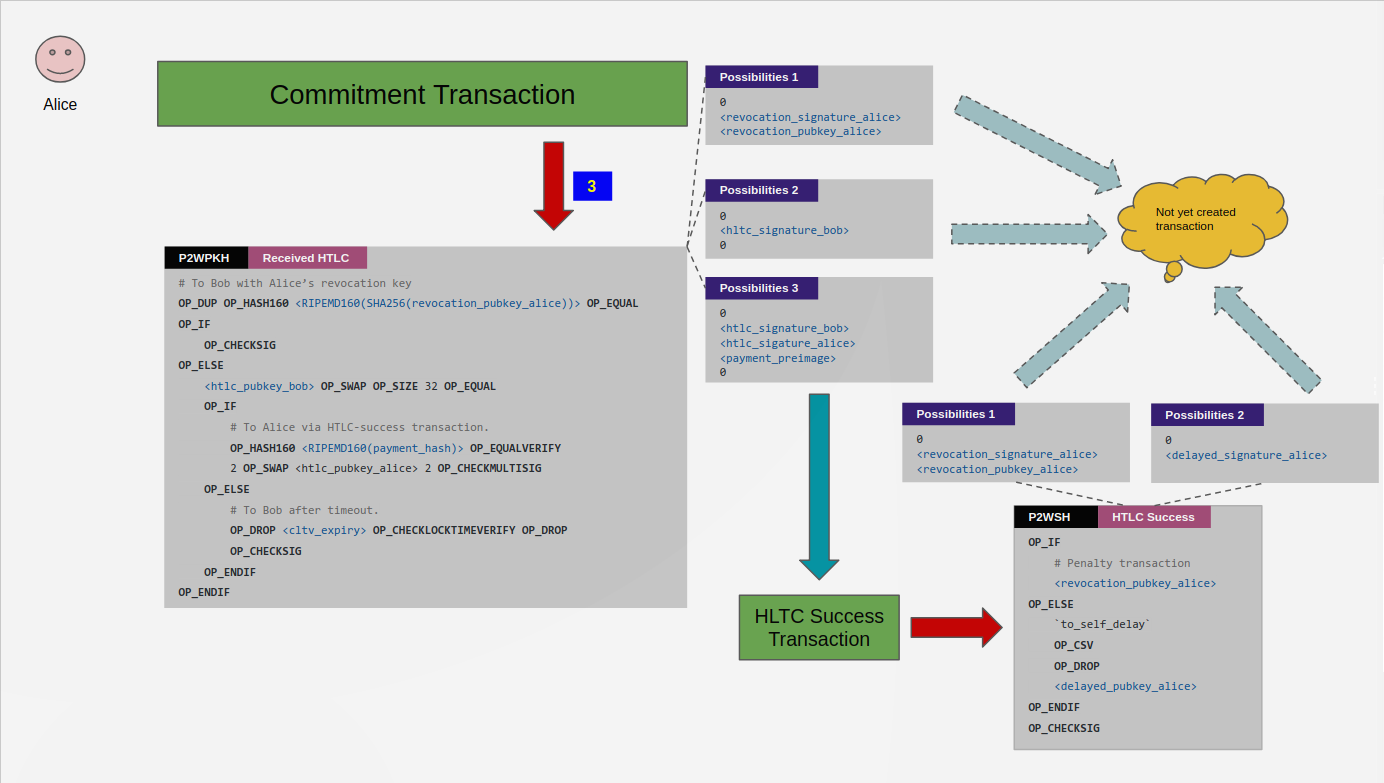 In Alice’s commitment transaction, Offered HTLC can be expressed in the following scriptSig:

Bob can spend the output by providing htlc_signature_bob after cltv_expiry has passed, meaning that the fund returns to the sender when HTLC times out. If Alice figures out the preimage of the hash and spends the output by providing htlc_signature_bob, htlc_signature_alice and payment_preimage, the fund will be locked up in a HTLC Success transaction, which looks almost identical to the HTLC timeout transaction but with nLockTime set to 0 (since we do not need to represent the cltv_expiry here). The output of the HTLC Success transaction is the same RSMC contract as in HTLC timeout transaction.

After exchanging potentially many commitment transactions, if there is no dispute between Alice and Bob about their respective final balance, they can collabrately construct a closing transction to spend the 2-of-2 multisig output of the funding transction and split the funds as per agreement. This will effectively close the channel.