Recently I added a feature in nioctib.tech to display bitcoin transactions in their hexadecimal format, with internal structure illustrated by different colors and tooltips describing what those numbers actually represent. The hope is that this could offer a direct visual impression about how serialized transactions look like and can potentially be used as a debugging tool as well.

So how do raw bitcoin transactions look like? Nothing is more authoritative than the code: 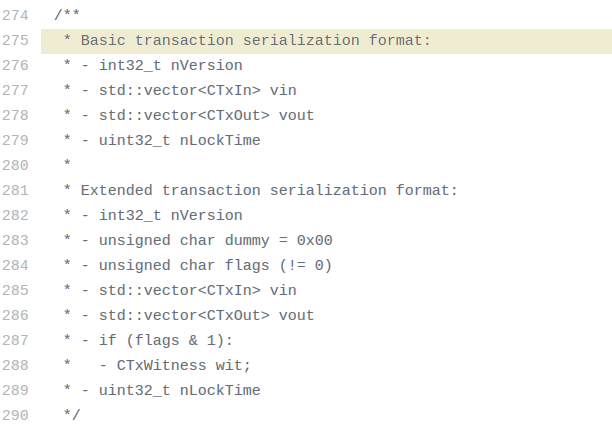 Following is the hexadecimal format of a basic transaction displayed in a colorized and structured way, let’s break it down one color at a time.

The long purple colored string afterwards 8a4730440220…e287940eb2dd4f35c3ee2a3 encodes the unlocking script defined in this transaction input. As we can see here it is supposed to unlock a P2PKH locking script, therefore these number represent a signture and a public key.

feffffff is the sequence number of the transaction input, for a comprehensive discussion about what it means and its evolution over the time, please take a look at this excellent Bitcoin StackExchange anwser.

Each transaction output is represented by two fields. In the case of the first transaction output, 00ca9a3b00000000 represents the bitcoin value carried by this output, which is 10 btc in decimal. 17a9147a1b6b1dbd9840fcf590e13a8a6e2ce6d55ecb8987 is a hex representation of a standard P2PKH locking script.

The structure of the second transaction output looks exactly the same as the first one.

e3b50700 is the locktime of the transaction, which dictates the block number or timestamp until which the transaction is locked. For a more in depth explanation please checkout this great post on learnmeabitcoin.com.

For version, transaction inputs, transaction outputs and locktime, they have exactly the same structure as basic transaction serialization. Please use the previous section as a reference and the tooltip feature for raw transactions at nioctib.tech if it is not clear.

Instead, let’s discuss flag and witnesses that are unique to segwit transactions.

The second byte 01 looks to the pre-segwit node like a transaction with 1 output, but since empty input is not allowed, it’s not really important. For post-segwit nodes though, it confirms that this is a segwit transaction. It will then expect the following bytes to encode transaction inputs, transaction outputs as well as a sequence of witnesses (one for each transaction input) and the locktime.